Historical Context for the First Issue of The Dawn of Tomorrow 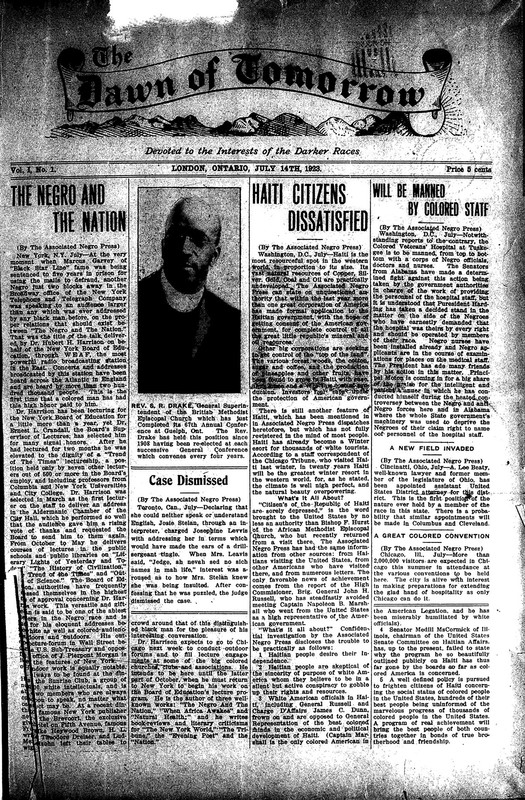 “J.F. Jenkins – Editor:” James F. Jenkins was born in 1884 in Forsyth, Georgia before coming to Canada in 1907. Jenkins was the editor and founder of The Dawn of Tomorrow, as well as founder of the Canadian League for the Advancement of Coloured People (CLACP), for which The Dawn was the official paper. Through his work, Jenkins sought to fight discrimination and improve the condition of the lives of Black Canadians. Jenkins died in 1931 following complications from a surgery.

“Paul Lewis:” Paul Lewis became a prominent member of the Black community in London after coming to London in 1914 from Philadelphia. Lewis was a leader of Beth Emmanuel Church and helped organize the Canadian League for the Advancement of Coloured People (CLACP) in 1925.

“It were but yesterday that Ethiopia had made a pilgrimage to the skies to light her candle from the altar-fires of heaven, and had held it aloof throughout the dark ages to brighten the footsteps of all mankind:” References the Biblical Ethiopia from the Old Testament, a great Hebrew kingdom of Africa. The reference to Ethiopia reflects the resurgence and reclamation of an African consciousness and history during the early civil rights movement of the 1920s.

“Dominion of Canada:” The official title to refer to Canada given by the British Government at Canada’s Confederation in 1867.

“immortal Dunbar:” Refers to Paul Laurence Dunbar, an African American poet and writer who lived from 1872 to 1906 and whose work was most influential throughout the twentieth century. His work, particularly his most acclaimed dialect verse poetry, reflected the lives of African American people in the United States at the turn of the twentieth century.

“American Missionary Association:” The American Missionary Association (AMA) was a nondenominational society aimed at providing and improving education for free Blacks in the United States. The organization began first as the committee set on defending the rights of the African slaves aboard the mutinied Amistad. It then moved to becoming an abolitionist movement in 1846 to providing schools and churches for freed slaves after the end of the American Civil War. The AMA founded nine of the most prominent Black colleges in the United States following the Reconstruction Era.

“Between 1848-1864:” This is the time period of active anti-slave sentiment and activism in the United States. The “Free Soil Party” was established in the United States in 1848 under a platform that opposed slavery and its expansion. 1864 marked the official end to the American Civil War and the emancipation of slaves in the South.

“Henry Bibb:” Born a slave in the early nineteenth century, Henry Bibb found freedom in adulthood, learned to read and write, and became an anti-slavery lecturer and writer in Detroit, Michigan. After the passing of the 1850 Fugitive Slave Act, Henry and his wife moved to Windsor, Canada where they established a school for Black children and in 1851 started their own paper called, The Voice of the Fugitive.

“Henry and Mary Bibb, Publishers of The Voice of the Fugitive newspaper,” The Harriet Tubman Institute: For Research on Africa and its Diasporas, 2016, http://tubman.info.yorku.ca/educational-resources/breaking-the-chains/toronto/henry-and-mary-bibb/ (accessed October 17, 2016).

“Elgin Association settlement in what is now Kent country, Ontario:” The Elgin Association, under Presbyterian abolitionist Reverend William King, founded the Elgin Settlement, or Buxton, just outside Chatman, Ontario for King’s fifteen former inherited African slaves in the nineteenth century. The settlement found great success in agriculture as well as produced a number of highly educated Blacks from the community’s local school.

“Rev. Hiram Wilson:” Hiram Wilson was a nineteenth century abolitionist who worked with the American Anti-Slavery Society and American Missionary Association. He established schools to educate newly freed African Americans in Canada. He first resided and taught in Dawn Settlement and eventually settled in St. Catherine’s where he operated a safe house on the Underground Railroad as well as another school.

“Dawn Settlement…more fugitives crossed into Canada at this point than anywhere else on the frontier:” The terminus point at which the majority of fugitive slaves arrived and settled in Canada through the Underground Railroad was referred to as “Dawn,” coming through Detroit, which was known by code name “Midnight.” Taking the Underground Railroad “from Midnight to Dawn” was the most common line for fugitive slaves to take to freedom.

“Fugitive Slave Law:” Also called the Fugitive Slave Act; was signed into power in 1850 by United States President Millard Fillmore despite controversy in regards to its constitutionality. The law allowed for appointed “fugitive slave commissioners” to capture and return runaway slaves in the northern states to their owners in the South, many times without due course of law.

“National Negro Business League:” The National Negro Business League (NNBL) was established by Booker T. Washington in Boston in 1900 to improve the economic lives of African Americans in the United States. Based in Tuskegee, Alabama, the organization was modeled by Washington’s beliefs that African Americans had to improve themselves through economic means to gain the respect of White Americans.

“Dr. Robert R. Moton:” Robert R. Moton succeeded Booker T. Washington as the president of the Tuskegee Institute and leader of the National Negro Business League after his death in 1915.

“United States Veterans’ Hospital, Tuskegee:” Also the Tuskegee’s VA Hospital and the Veteran’s Affairs Medical Center Tuskegee. The United States Treasury commissioned the creation of a hospital in the 1920s that was to serve African American Veterans from World War I in the South. The objective of a Black hospital was to combat issues of segregation facing Black veterans in the South. The institution was dedicated on February 13, 1923.

“Salvation Army:” Part of the greater social movement by Protestants, the Salvation Army began in England in 1865 by Methodist minister William Booth before spreading into the United States in 1880. The organization was aimed primarily at combating poverty.

“Lead, Kindly Light:” A well-known hymn composed from the poem “The Pillar of the Cloud” written by British Anglican theologian John Henry Newman in 1833. The song was composed into a hymn in 1845.

“Hampton Institute:” Also known as Hampton University; is a historically Black university residing in Hampton, Virginia in the United States. The university was opened in 1868 under the name of the “Hampton Normal and Agricultural Institute” as part of the Freeman’s Bureau to educate the recently freed Black community in the South. The school’s noted alumni include Booker T. Washington.

“the present migration of Negroes from the South:” Refers to the “Great Migration” which was a “mass movement” of African Americans from the rural South to the urban North. The movement gained momentum during World War I, when economic, social and racial pressures within the South caused Black Americans to seek refuge in the Northern States and Canada.

“Anti Ku Klux Bill:” On June 28, 1923, the Governor of Illinois [Governor Small] signed into action an Anti-Klan Bill, which banned anyone from appearing in any public place with “‘evil or wicked purposes’ while hooded, robed or disguised identity.”